At our multi award-winning car parks we offer a 24/7 manned, zero-crime and a guarantee against vehicle related thefts. We were named as the 'Safest Car Park in the World' and were voted '10th Safest Place in the World' by Science Technology USA.

As well as winning numerous industry accolades and awards; we have received countless local & national press coverage and have been featured in Channel 5's Fifth Gear as well as BBC's Crime Beat programme.

We pride ourselves on our level of customer service and our professional, friendly staff operate on a 24-hour operation, seven days a week and are always ready to assist customers whatever the time of day or night. 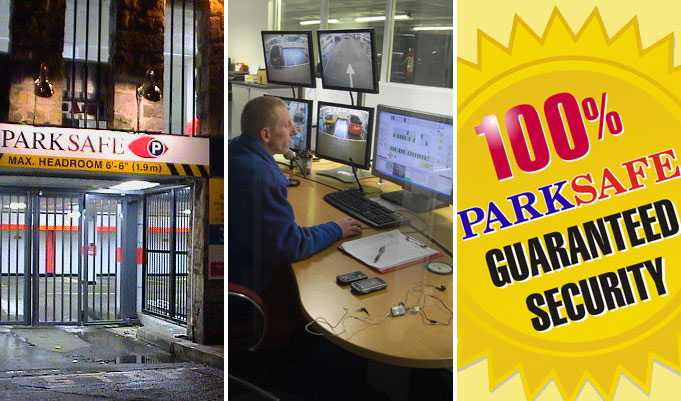 How the 'Safest Car Park in the World' works

On arrival to the car park the customer collects a smartcard from the barriers ticket booth; the smartcard logs the relevant car and arrival time information. You will then be able to enter the car park.

Park your car in an empty bay, each parking bay is fitted with a movement senor and is monitored by at least two cameras at any one l time; In total each Multi Storey Car Park car has around 300 cameras monitoring each car, pedestrian access, stairwells, entrance and exits. (All in place for the security of each car and the safety of our customers.)

Once parked you need to activate your bay's sensor by placing your smartcard ticket against a Bay Controller found on each floor in the stairwells and inputting the Bay number where you parked your car.

On your return, your sensor is de-activated when you pay your parking fee at one of the Pay on Foots.

Any attempt to break into your car once you have left the Multi Storey Car Park will activate your bay sensor and set an alarm off in the Control Room and activate specific cameras monitoring your car. The Car Park immediately locks down, No cars are able to leave or enter and all external pedestrian doors are locked until the incident is resolved.

There has been zero crime since 1998 at either Bold Lane, Derby or Milre House, Lancaster.

To exit the car park the customer pulls alongside the Card Acceptor and enters the Smartcard into the device. If this is a valid, paid up smartcard, the security is released and the exit barrier will rise and the exit gates open.

The idea for the Parksafe high security system originated in 1992 when the Parksafe founder, Kenneth Wigley, experienced a break in to his car in an airport car park. He approached the car park attendant and received the usual reply every car park operator gives 'that vehicles were 'left at the owner's risk'. Ken didn't think this was acceptable. Firstly, having his possessions stolen, and secondly, that even with the CCTV in place there, the CCTV was only allowed to be used for a reference rather than evidence. So, Ken decided to invent a car park that would protect the customer who was using his car park.

After five years of development, he created the concept whereby every parking bay would have a Parksafe Sensor installed which would be automatically monitored and overseen by one controlling officer. The technology that was designed has made theft from inside the car park impossible. On 18th January 1998 Parksafe opened its first car park at Bold Lane in Derby. Since the opening of Parksafe, each car park has operated completely crime-free.